The stage Musicals of Bernard J Taylor are performed around the world. For sheet music, libretti or production inquiries see Production Info. Some are available on CD for download. Click on the images for more information about each show.

BACKSTAGE AT OZ is a comedy musical that follows the backstage antics of a group of six actors and a director who are taking part in a stage production of The Wizard of Oz. There is a pompous Shakespearean actor who thinks his role as Oz is beneath him, a nervous drunk playing the Cowardly Lion, a practiced extrovert playing the Tin Man, a sharp-tongued cynic playing Glinda the Good Witch and a more easygoing actress playing The Wicked Witch.  The Pollyanna nature of the actress playing Dorothy fits the part even though her breasts are too large for the role. All pull together after the Munchkins go on strike demanding bigger pay for little people. There are 10 songs. You can see scenes from the San Antonio production on Youtube: https://youtu.be/9AYe1805lbM 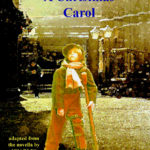 A CHRISTMAS CAROL The ever-popular Christmas story has been adapted for a cast that can be as few as 12 or can be expanded to accommodate larger casts. It combines the ghost of Marley with the Ghost of Future Past and requires only one child performer as Tiny Tim (though additional children can be added). It combines new songs with traditional songs, hymns and carols and has a total of 20 songs. The other two ghosts can be played by women or men. High quality backing tracks are available, as well as orchestrations for a pit band of 6 to 10. 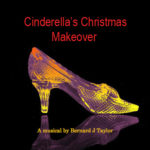 CINDERELLA’S MAKEOVER: A new spin on the Cinderella story, with music by a variety of classical composers plus a modern beat. Cinderella is discovered by a talent scout, gets a makeover, falls into peril, is rescued, falls in love and appears on “Ruritania’s Got Talent.” It has music taken from a raft of composers and features some of Taylor’s favorite music of all time, plus pieces of his own:  Leo Delibes, W.A. Mozart, J.S. Bach, Jules Massenet, Carl Maria von Weber, Antonin Dvořák, Luigi Boccherini, Edvard Grieg, Josef Haydn, Felix Mendelssohn, Frederic Chopin, Jacques Offenbach, P.I. Tchaikovsky, Camille St Saens and Bernard J. Taylor. Arranged and orchestrated by Bernard J Taylor

THE CORPORATE PIRATE OF PENZANCE. Incorporates many of the usual narrative elements of a Gilbert and Sullivan story – love across the social barriers, people not being who they seem to be, etc – and weaves them into a more modern story.

INTRODUCTION TO The Corporate Pirate of Penzance :

THE GOLDEN GLEE CLUB is a comedy musical inspired by the Golden Girls. It was first performed at Woodlawn Pointe in San Antonio with a cast of male actors in drag playing the four central characters, plus two additional characters – making a cast of six. The production was wildly successful with audiences and received rapturous standing ovations (and lots of laughter) during its run. 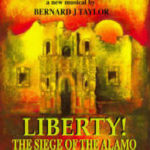 LIBERTY! THE SIEGE OF THE ALAMO. Based on the siege of the Alamo in Texas in 1836, when fewer than 200 men fought for Texan independence against the Mexican army of Santa Anna. Concept album features American and Australian artists. It had its world premiere at the Josephine Theatre in San Antonio.

A SONG FROM LIBERTY: 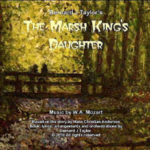 THE MARSH KING’S DAUGHTER. Based on the story of the same name by Hans Christian Andersen and is set to music by Mozart arranged and orchestrated by Bernard J. Taylor. It ransacks Mozart’s repertoire for his most well-loved and most beautiful music and puts it all together in a stirring tale of hardships overcome, evil vanquished and opposites attracted.

INTRODUCTION TO The Marsh King’s Daughter:

MAKE ME A MUSICAL. A modern backstage comedy with a Faustian twist and a cynical view of showbiz. Concept recording stars Lon Satton, Claire Moore, Maurice Clarke, and Kathryn Evans.

SCENES FROM Make Me A Musical: 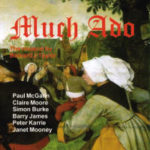 MUCH ADO Based on Shakespeare’s Much Ado About Nothing. Concept recording stars Paul McGann, Claire Moore, Simon Burke, Janet Mooney, Barry James and Peter Karrie. The show had its world premiere in Shakespeare’s birthplace, Stratford upon Avon, and featured members of the Royal Shakespeare Company.

INTRODUCTION TO Much Ado:

NEW GUY AT SCHOOL. A modern version of the classic of the classic novel Tom Brown’s Schooldays by Thomas Hughes (the school story that created the framework for all school stories that followed, including  the Harry Potter stories) this musical with a basically rock feel. It is perfect for school productions and addresses a topic that has always been with us and which has been increasingly in the new: bullies and what to do about them. 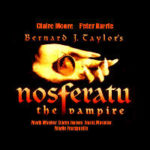 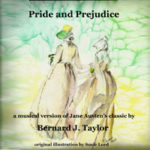 PRIDE AND PREJUDICE. Based on Jane Austen’s novel. Concept recording stars Peter Karrie, Claire Moore, Gay Soper, James Staddon, Janet Mooney and Christopher Biggins. To date there have been more than 40 productions of this show around the world, most recently in Japan.

THE ROCK ‘N ROLL CAFE.  A distillation of the rock ‘n roll experience of young people in the late 50s, 60s and 70s – the heyday of rock ‘n roll –  with music reminiscent of that era and references to veteran rockers like Elvis Presley, the Beatles, the Rolling Stones, Fats Domino, Jerry Lee Lewis, Eddie Cochran, Journey and others.

THE ROAD TO MADNESS. Scott Fitzgerald is interviewed in purgatory by a modern admirer, who feels deep nostalgia for the era that Fitzgerald wrote about, even though she has never known it first hand. 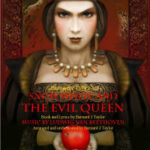 SHOW WHITE AND THE EVIL QUEEN. Can anyone stop the evil queen from killing Snow White and gaining total control of everything? The show uses the music of Beethoven.

INTRODUCTION TO Snow White and the Evil Queen 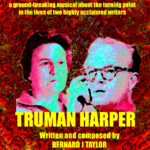 TRUMAN HARPER is a two-person musical that reflects on a turning point in the lives of Truman Capote and his friend since childhood, Harper Lee. Capote is preparing to write his fact-based novel In Cold Blood, while Harper Lee – know to her friends as Nelle – is awaiting the imminent publication of her Pulitzer Prize-winning novel To Kill A Mockingbird. Capote seeks Lee’s help in researching the background to the killing of a Kansas family that leads to the arrest and conviction of Dick Hickock and Perry Smith. Capote forms a deep attachment to Smith and is devastated when he is hung for the murders of the Kansas family. 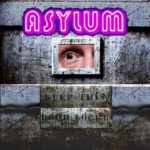 ASYLUM features a number of historical as well as fictional characters who are seeking asylum from the madness of the world. They include Beethoven,  Jean Valjean from Victor Hugo’s Les Miserables, Miss Havisham, Pip and Estella from Great Expectations),  Javert from Les Miserables,  Marilyn Monroe, Helen Keller, and  Martin Luther King Jr. Orchestrations by Karl Logue and David Cullen (Andrew Lloyd Webber’s arranger). You can see an introduction to the show on Youtube: Act One 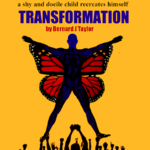 TRANSFORMATION is about a shy and docile child who recreates himself and fights back against the bullies who have taunted him. It can be performed as an oratorio or a stage musical, done in modern dress. “The show combines the dramatic qualities and the timeless melodic strengths of Les Miserables with the more experimental content of Sondheim.” – Stewart Thompson, senior examiner, Victoria School of Music and Drama, London (which in 2013 made Bernard Taylor an honorary fellow for “services to music and the performing arts”)

WUTHERING HEIGHTS. Based on Emily Brontë’s novel. Concept recording stars Lesley Garrett, Dave Willetts, Clive Carter, Bonnie Langford and Sharon Campbell.  The show has received a number of productions around the world and has toured The Netherlands and Australia.